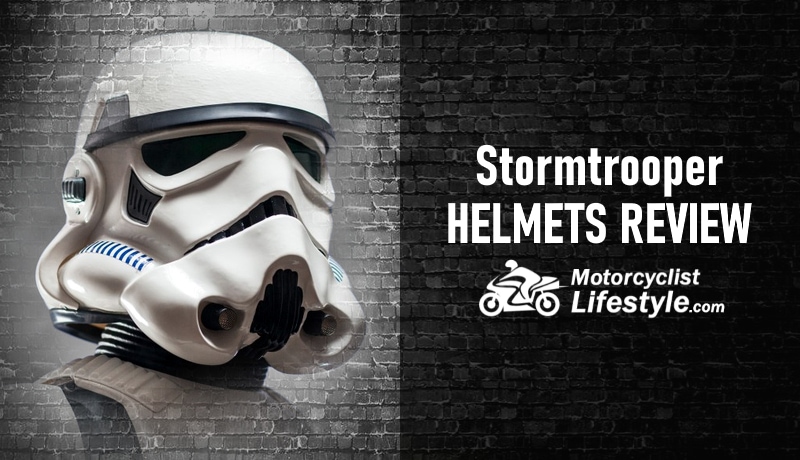 “Are you looking for Stormtrooper Motorcycle Helmets?”

If yes, then you have come to the right place. And we know how much you love your motorcycle and Star Wars. Star Wars is an American epic space adventure created by George Lucas. From movies to TV series and video games to comic books, everything depicts the adventure of various characters from “a long time ago in a galaxy far, far away.”

Today, I really began to take notice that every Star War movie and motorcyclist have one thing in common and that is an adventure. We love all sorts of adventures.

Personally, I love all of the characters of the Star Wars movies. Stormtroopers are some of Star Wars’ most iconic characters that evolve from film to film. The way this character is portrayed in these films is fantastic. From weapons to costumes and helmets, there was a lot of thought put into the Storm Trooper character involved in this epic space adventure.

That’s why we are here today. We are going to provide you with a variety of Stormtrooper helmets that you can wear riding your motorcycle.

Combining both of your adventures into one, which will fulfill your fantasy of becoming a Stormtrooper Motorcyclist. So, without wasting any more time, let’s take a look at the article below:

Once again HJC did something that no one expected. First, the HJC CS-R3 Spiderman helmet and now the HJC CS-R3 Storm Trooper helmet that looks exactly like it made the Kessel Run in 12 parsecs while tied to the outside of the Millennium Falcon. Unfortunately, the troops drew to the dark side of the Force but that’s okay! We must embrace our destiny and do what we do best. The same goes for motorcycle riders who are born to ride. And the HJC CS-R3 Storm Trooper helmet is for fans of Star Wars who love to ride!

There were some complaints from our readers regarding the authenticity of Star Wars motorcycle helmets. Truth to be told, at first, there weren’t any Star Wars helmets available on the market that not only meet safety standards but also didn’t look exactly like the helmets in the movies. But, then HJC introduced some officially licensed helmets of one of the great franchises of recent times, such as Star Wars, Marvel, and others.

HJC’s CS-R3 is the improved version of the HJC CS-R2 entry-level motorcycle helmet. Long before it was chosen for the Spiderman- and Storm Trooper-designed helmets, HJC CS-R3 was already an amazing mid-priced helmet that riders preferred to have over other expensive helmets. In our opinion, it is one of the entry-level helmets that proved good safety helmets still come at an economical price.

CS-R2 and CS-R3 are both made with the advanced polycarbonate composite shell using advanced CAD technology but the HJC CS-R3 is quite a bit smaller, which made it more aerodynamically stable than its predecessor. It is lightweight in design and provides superior fit and comfort to the rider. The helmet has an intermediate oval shape that makes it a unisex helmet that weighs only 3.55 lbs.

So, the point is, not only do you get a helmet in an inexpensive price range but you also get an advanced polycarbonate shell that has an excellent tendency to absorb heavy impacts. It is the first line of defense in a motorcycle crash.

Above all, it meets DOT safety standards required by laws. Isn’t it great?

Exactly the way you want it!

The HJC CS-R3 has a large eye port that offers a better and a much wider range of visibility for the rider. If you like summer riding, then you are going to love this helmet. Another reason is that the HJC CS-R3 comes with the HJ-09 face shield that provides 95 percent protection from harmful UV rays. This face shield also has an anti-scratch coating on it.

You must be thinking, what if I ride in the winter?

Well, if it really is your concern then don’t worry! HJC just took care of it. HJC has installed the 2-stage shield closure system with a shield locking system. It offers an extremely tight and secure seal, which will not only protect you from the cold wind but also decrease the noise level while riding at high speed. Apart from this the CS-R3 also has the HJC’s RapidFire Shield Replacement System. What’s great about this is that you don’t see any helmet manufacturer using this premium feature in an economical helmet except HJC. With the RapidFire shield replacement system, you can install and remove your face shield without the use of any tools. And to put the shield on just snap it back into place!

Good news for long haul riders! HJC has the Advanced Channeling Ventilation System (AC-S) that provides full front-to-back airflow, which allows riders to stay dry and cool even on hotter days. It has an adjustable forehead vent that allows cool air to pass from the top side of the helmet through the internal liner and flush heat and humidity from the two rear exhaust vents of the helmet.

To offer greater comfort to the rider, HJC has supplied the CS-R3 helmet with a plush, Nylex interior with removable and washable interior cheek pads and liner. These cheek pads are interchangeable in all helmet sizes.

As an added bonus you will get built-in communication speaker pockets in case if you need to use a Bluetooth headset or speakers with your helmet.

I am sure you probably started thinking about Storm Trooper FN-2187 who is known as Finn when you see the name of the first Storm Trooper helmet that we mentioned here. This helmet was used in the latest Star Wars Episode 7: The Force Awakens (2015).

As we know, after Palpatine’s death the Storm Troopers started serving under a new leadership called the First Order. These Storm Troopers were recruited at a very young age for loyal service and given serial numbers and names accordingly.

The First Order Storm Trooper helmet is an officially licensed Star Wars Episode 7 helmet suitable for both adults and teens. It is a two-piece helmet that you can hand wash easily. However, it won’t provide much protection to your head during a crash but can protect you from bugs and the wind.

I am so excited about this helmet. Having the experience of wearing a realistic and movie-accurate Storm Trooper helmet while riding your motorcycle is unbeatable.

The Shadow Trooper helmet had other appearances besides the movies. It appears in Star Wars Jedi Knight 2: Jedi Outcast. The Shadow Troopers wore a black helmet and black armor made from a lightsaber-resistant metal called Cortosis. This gives the shadow stormtroopers unique abilities like using Force Powers and invisibility, which they frequently use to ambush the enemy.

So, make sure you understand the consequences of wearing this helmet instead of a safety-approved motorcycle helmet.

Who Are the Star Wars’ Stormtroopers?


Storm Troopers are the constant reminder of the Dark Side of the Force. The sinister Imperial army of the Galactic Empire. Both the army and the Dark Lord show the dark future that awaits. The Storm Troopers were introduced in the original trilogy of Star Wars movies that were recognized by their white armor, helmet, and lethal weapons. They served in the Imperial Army and the First Order. But there is a history of these troops. They were an extension of the Clone Troopers. These Clone Troopers were the fighters of the Army of the Republic.

The Clone Troopers were made in the laboratory for the sole purpose of following the orders and commands of the supreme chancellor. These troops were brainwashed and trained to be fierce. But, after the clone wars, this army was transformed by Chancellor Palpatine into the Storm Troopers. After that, they served the Dark Emperor Palpatine. But, when both Lord Darth Vader and Emperor Palpatine died, they were fragmented and ended up in the Army of the Imperial Remnant.

Without any certification, it would be just a mask that will block wind and noise and will only keep bugs, dirt, and sand particles out. Moreover, a motorcycle helmet also should be aerodynamically stable. This means, if you are riding at high speed, then your helmet must be wind resistant and remain stable and fit tightly on your head.

So, don’t assume that you are a hard-core motorcyclist and you do not need protection while riding. If you are going to use the Star Wars Storm Trooper helmet, you need to keep in mind that accidents can happen, and you must be prepared for that.

Plus, as a motorcycle rider, it is your duty to be careful and show responsibility while riding on the road. You must think about your precious life, your motorcycle, and most importantly the lives of others. In order to do that, one must have motorcycle insurance to protect his/her own life against loss, in case of an accident. There are several reasons for riders to maintain and secure motorcycle insurance.

Adventure riding has been on the rise in the recent years, and therefore, a lot of people are looking for an adventure helmet. That’s why we are here with our detailed review of these helmets and we will show you the best overall, the lightest and the quietest adventure helmets you can find on today’s… [Read More]

Klim is mostly known for a quality motorcycle gear such as adventure gloves and jackets. Few years ago, the company decided to create their very first adventure helmet called Klim Krios. It became a successful competitor to other premium ADV helmets on the market such as Shoei Hornet X2 and Arai XD4. The most interesting… [Read More]

Scorpion EXO-R420 is the successor of the famous full-face motorcycle helmet, the legendary R410 and it is now even better than before! This improved version of the popular predecessor from the 400 series has a stylish look and it is available in many different colors and graphic designs. Scorpion is one of the best motorcycle… [Read More]

Bell Rogue is a very interesting motorcycle helmet that can be hard to put into a specific category. Let’s just call it an open-face helmet. But with some optional accessories, that can be bought separately, we can quickly make it look and feel more like a full-face helmet. The first thing that will make you fall in… [Read More]

What Are you looking for?

Motorcyclist Lifestyle is a participant in the Amazon Services LLC Associates Program, an affiliate advertising program designed to provide a means for sites to earn advertising fees by advertising and linking to Amazon.com website. Amazon logo is a trademark of Amazon.com, Inc. or its affiliates.