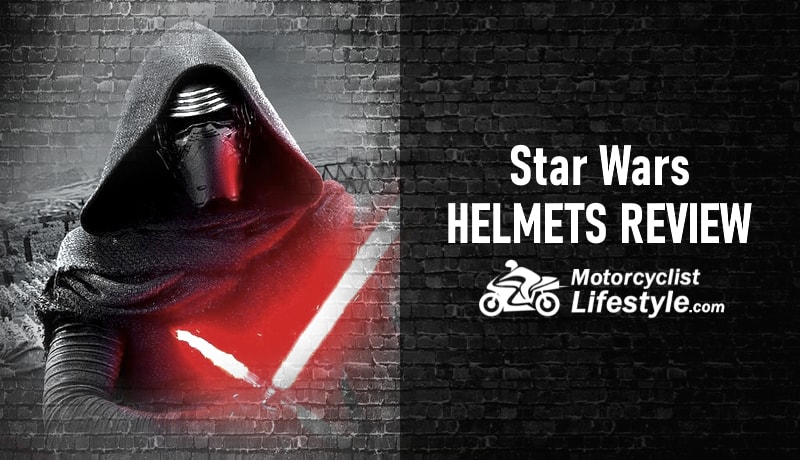 Star Wars is the world’s most famous space opera franchise that tells the adventurous story of epic characters from ‘a long time ago in a galaxy far, far away.” In only a few years, it became a worldwide famous pop culture, which led to the TV series, films, comics, and video games.


Well, in my opinion, the reason behind Star Wars’ success is the fact that George Lucas was strong enough to put his heart into the film series. Full credit goes to Lucas for making such an epic series. Somehow, a simple, adventurous movie has real depth and real emotions that were enough to win the hearts of millions.

Especially for male fan followers, who are consistently looking for different ways to fulfill their Star Wars fantasies. There are many things are common among young generation boys. Two of them are motorcycles and Star Wars helmets.

So, wouldn’t it be cool to merge both of them? In fact, that’s why we are here today. As we would like to inform you that the world’s No.1 motorcycle helmet manufacturer, HJC, recently launched the Star Wars graphic characters officially licensed Star Wars Motorcycle helmets.

Boba Fett was a bounty hunter and the son of the famous Jango Fett. After the death of his father in the battle of Geonosis, he became the galaxy’s best bounty hunter and worked for both Jaba the Hutt and Lord Darth Vader.

HJC’s Boba Fett motorcycle helmet has an identical graphic pattern like the original Boba Fett helmet with the various superior ventilation system and the strongest shell design on the RPHa 11 Pro platform.

For more informations, you can read the Boba Fett Motorcycle Helmet Review and find out if the RPHa 11 Pro helmet will be the right choice for you.

Next up, the Kylo Ren motorcycle helmet. Kylo Ren was the children’s favorite character that appeared in Star Wars: The Force Awakens movie. Kylo Ren was the antagonist and evil counterpart of Rey. Many people considered him the true heir of Lord Darth Vader, who led the army of The First Order and fought against the new Jedi.

The Kylo Ren motorcycle helmet is on HJC’s same RPHA 11 Pro platform as the Boba Fett helmet. This is a top-of-the-line helmet from HJC and falls into the category of premium helmets.

So, for the complete information on this officially licensed Star Wars Kylo Ren graphic character helmet, you can check the Kylo Ren Motorcycle Helmet Review.

You can see that HJC’s RPHA 11 Pro helmet is the main platform of both the Kylo Ren and the Boba Fett motorcycle helmet. The RPHA 11 Pro platform is a top-notch helmet in HJC’s premium series that features all advanced technologies of the helmet industry.

It has PIM+ technology (Premium Integrated Matrix), which is not an ordinary shell but a composite of carbon fiber, fiberglass, and aramid to create a blend that makes it one of the lightest and strongest shells ever built. Plus, it comes with an Advanced Channeling Ventilation System (AC-S) that is available only in the premium helmets of HJC’s. This technology provides a full front-to-back airflow system that keeps the rider dry for a long period of time. Not just that, it’s enlarged eye-port and Rapid Fire 2 Shield Replacement System are two additional features provided by HJC.

Now, it comes in two Star Wars graphic characters, officially licensed print that makes it more stylish than ever. That means you can be a bounty hunter (Boba Fett) or a lord of the dark side (Kylo Ren) anytime you want. All you have to do is wear this Star Wars officially licensed helmet, which not only provides you with ultimate protection but also shows other riders, how cool you look in these helmets.

The best thing about Star Wars helmets is that you can fulfill your fantasy of riding a motorcycle with a Star Wars helmet without compromising any safety or any helmet features.

Adventure riding has been on the rise in the recent years, and therefore, a lot of people are looking for an adventure helmet. That’s why we are here with our detailed review of these helmets and we will show you the best overall, the lightest and the quietest adventure helmets you can find on today’s… [Read More]

Klim is mostly known for a quality motorcycle gear such as adventure gloves and jackets. Few years ago, the company decided to create their very first adventure helmet called Klim Krios. It became a successful competitor to other premium ADV helmets on the market such as Shoei Hornet X2 and Arai XD4. The most interesting… [Read More]

Scorpion EXO-R420 is the successor of the famous full-face motorcycle helmet, the legendary R410 and it is now even better than before! This improved version of the popular predecessor from the 400 series has a stylish look and it is available in many different colors and graphic designs. Scorpion is one of the best motorcycle… [Read More]

Bell Rogue is a very interesting motorcycle helmet that can be hard to put into a specific category. Let’s just call it an open-face helmet. But with some optional accessories, that can be bought separately, we can quickly make it look and feel more like a full-face helmet. The first thing that will make you fall in… [Read More]

What Are you looking for?

Motorcyclist Lifestyle is a participant in the Amazon Services LLC Associates Program, an affiliate advertising program designed to provide a means for sites to earn advertising fees by advertising and linking to Amazon.com website. Amazon logo is a trademark of Amazon.com, Inc. or its affiliates.